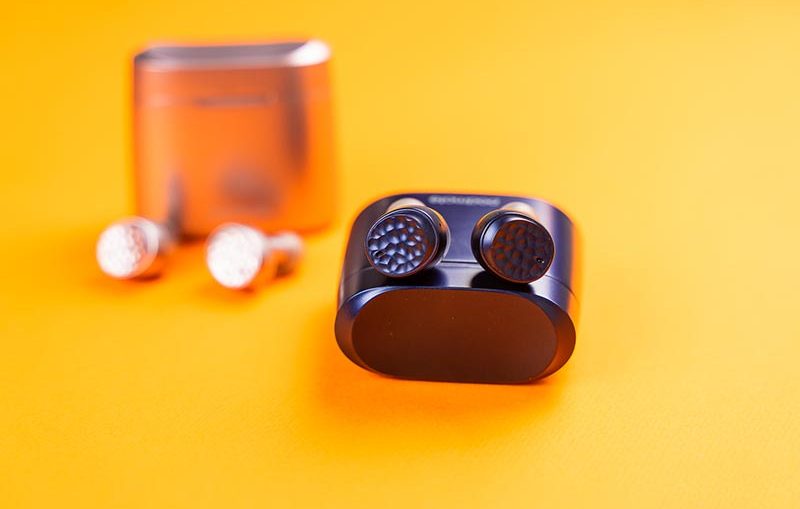 Change is not necessarily good, Padmate understand this and their users. Instead of rushing to upgrade every parameter, they just revise the core technologies. Just that is enough to bring users satisfaction.

The box of Padmate Tempo T5 Plus is quite familiar. Outside is white paperboard, black inner box, surrounded by company name, product name in silver imprinted like many other TWS products of Padmate. Inside includes a headset with a charging case, an HDSD book, and a microUSB charging cord.

Its appearance is unchanged from the regular Tempo T5. Stylized folding detail, looks similar to the roof design of ancient architecture of Huizhou, China. The design language is similar to the normal Tempo T5, just now Padmate T5 Plus has two more choices of rose gold, navy blue and silver, more diverse.

Overall outside the headphone box firmly, certainly. The body size is quite thick, large, designed in vertical form instead of horizontal like many other True Wireless lines.

However, it is still small enough to fit in the palm of the hand or easily put into the pocket.

Padmate Tempo T5 Plus case cover is designed to open. Under the body of the case is attached magnets, the ability to hold the lid firmly, hard to slip out. The intersection between the lid and the case body is bent in a soft wave pattern, quite good looking.

The middle of the case cover and the body have an LED attached to indicate the remaining battery life. The light only lights up when you take the headset out of the box and put it back in place. The interior is nothing special, similar to many other good wireless headphones series.

On the bottom of the case is the microUSB charging port.

Open the lid of the box and we can see the striking sparkling housing inside. The faceplate of Tempo T5 Plus is similar to the regular T5, stylized lines, creating strange, good-looking, honeycomb-like patterns.

These patterns are concave, creating a sparkle when light shines on. Padmate’s headset uses a touch-sensitive sensor, similar to the Pamu Slide and Pamu Slide Mini.

Its surface is also angled to increase exposure for navigation operations.

In addition, if you notice, on the facepalte there is a small hole that plays the role of the receiver of the built-in microphone.

Housing is made from ABS plastic, the level of finishing is quite good, strong and extremely lightweight, only 4.8g on each ear. Housing size is moderate, not too big, fits many ear sizes.

The ear canal is lengthened to allow deep penetration into the user’s ear cavity, while increasing its ability to soundproof the environment. Inside is the 6mm driver, though not large but powerful enough to provide a good sound quality in the price range.

The “light” upgrade version of the T5 naturally supports the bluetooth 5.0 standard, in addition to that now Tempo T5 Plus also has an aptX codec and the new Qualcom QCC3020 chip , which increases stability, smoothness as well as possible. Save energy used for headphones. A significant upgrade on this new version.

Also to mention some other features inherited from the old version. Most significant is the water resistance up to IPX6, quite high compared to the price range of less than 2 million Tempo T5 Plus. With this level of water resistance and firm grip, you can fully use the Padmate’s new TWS pair as a sports headset.

In addition, this headset also has the ability to prevent passive noise and noise for conversation thanks to the integration of cVc technology, 2 conversation microphones, support for virtual assistant activation, the ability to automatically connect and control. touch, listen to the call with both ears. Quite full of practical features that not every TWS line in this $59 price range also.

In terms of battery life, the Tempo T5 Plus has twice the battery life of its predecessor. The ability to play music continuously for up to 8 hours, really good even when compared to high-end headphones. The battery when included with the charging case is 18 hours. The figure shows a remarkable improvement compared to 3.5 hours and 14 hours of the old version.

Firstly, considering the feeling of wearing on the ears, Tempo T5 Plus is quite light, accompanied by an ergonomic design that helps the housing hold the ear, good fit, and feels comfortable to wear. Like the Pamu Scroll, the circular design, without the extra tail of the Pamu Slide, helps the T5 Plus record an extra appearance when worn on the ear.

The connectivity is really good, almost no lag phenomenon even when the battery is low when listening to music. Relatively low latency, does not affect the gaming experience. The ability to pair with the transmitter is also, very good. Perhaps when talking about the issue of bluetooth connection, there is probably not much to criticize about Padmate’s products.

However, it still has a minus point, that is sometimes the two sides of the housing are not connected at the same time or only one ear can be connected. You have to put it back in the box and get it back to fix this. Although not happening often, it is acceptable for the price of $59 but it is still a small deduction for Tempo T5 Plus.

In terms of sound quality, I’m not too impressed with the sound quality of a True Wireless headset, priced at $59, but I can say that Padmate did well with this version. Its mid range is standard, clear, solid, especially for vocals. Although the lack of sweetness creates the soul of the lyrical music, but I think it should not require too much in this price range headset.

The mid range is probably the most prominent and complete, but for the treb, let’s say that it rounds the shoulders. Treb of this headset is not too good, it just stopped at a temporary level, lacking the necessary brightness of a good treb strip.

The bass is also quite good, hitting quite force, even though the driver is only 6mm but the bass range is fully shown, round, compact, not pulled tail. Although not going deep, not enough violence, I still appreciate the ability to recreate the bass of Tempo T5 Plus.

Overall, I can say I am satisfied with this sound quality, it is okay enough for me to listen to the warm lyrical melodies of Quang Le and Truong Vu. It is hard to ask for more from a “true wireless” earphone at this price.

A worthwhile upgrade of Tempo T5, Padmate Tempo T5 Plus not only changed aptX codec standard , it was followed by an outstanding upgrade in terms of battery life, from low battery, only There are 3.5 hours up to 8 hours of continuous play. A significant upgrade in user experience.

Combined with that is the inheritance of outstanding advantages from its predecessor such as compact design, fit, hold ears; Water resistant up to IPX6; cVc technology and 2 noise-canceling microphone; Bluetooth 5.0; good sound quality; … No doubt the T5 Plus is now worth buying more than its predecessor.